Mainstream feminists seem to think that the be-all and end-all issue to fight is the wage gap. However, studies show that, for the most part, the wage gap exists but not for the reason that people typically think. It has less to do with women getting smaller paychecks than men in similar positions, and more to do with how many women are not going towards those high paying careers.

Again, this doesn’t mean that the wage gap is a myth. In fact, the recent annual data shows that women working full time in Canada still earned 74.2 cents for every dollar that a full-time male employee made. And in some cases, highly educated women aren’t getting paid as much as men who have the same, or even less, credentials. 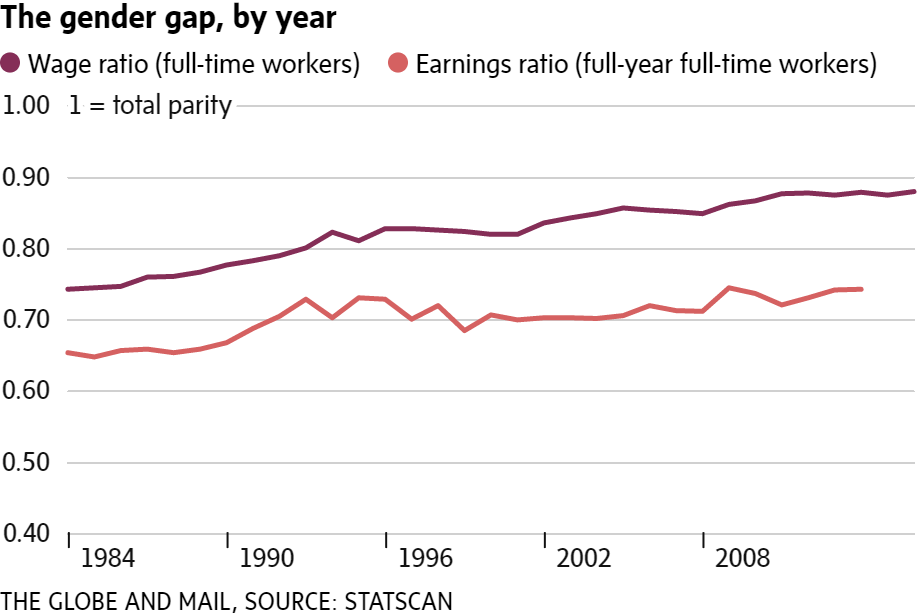 The main flaws in those numbers, is that researchers don’t consider different employment choices between men and women, or the number of hours they work. Almost none of them take into account the pressures women have on childbearing, and how pregnancy and motherhood can detract from a woman’s employment status.

In summary, within the Western world, the wage gap isn’t actually just as result of rampant discrimination. This belief leads to governments attempting to aid the situation with affirmative action. Thus, many men plead in defiance that they work just as hard, and women’s wages are still stagnant. This means that the issue is much more complicated than that.

I wanted to know why.

Why are so many capable women avoiding those high paying jobs? There are countless reasons, and multiple online threads attempting to convince me that women simply don’t want to do those jobs, that they aren’t that good at bargaining for a better wage. While some I deemed completely laughable, others seemed quite fitting. The actual fault can be traced to the psychological effects of living in a legacy of women being excluded from professional spaces in the modern world. And the one that hit close to home for me, was the concept of Imposter Syndrome.

Individuals who have Imposter Syndrome, “experience intense feelings that their achievements are undeserved and that they’re likely to be exposed as a fraud,” as written in a report created by the International Journal of Behavioral Science.

Mind you, this isn’t a gendered phenomenon. High achieving millennials and graduate students are plagued with this mindset no matter what gender they identify as. But it is inarguably and disproportionally afflicted by women – including myself.

My Experience with Imposter Syndrome

I found myself looking at the accounts written by female professionals, and connecting words that perfectly explained what I have been experiencing ever since I was a young adult. Like ever since I set foot on my university campus I have felt out of place amongst the academics and keeners who did everything on time and seemingly without flaw. Or when people offer me compliments, and tell me that I seem to have everything put together, I can’t agree with them. I immediately think of my messy room back home, the dirty dishes on my desk, and the piles of readings I have yet to finish.

In classrooms, where male students offer their opinions freely and confidently, I take time to repeat my answer over and over in my head until perfection, to the point where I still kind of stutter on my words, or the class has moved on to completely different discussion point.

I think about how social media has allowed me to curate a very edited version of myself; from the articles I share on Facebook, to the highly selective photos I’ve posted on my Instagram. Sometimes I am extremely thankful that I was born in an era where people can take a picture of themselves with the right lighting, angle, and dress so that those candids of double chins, belly bumps, or big foreheads don’t have to presented to the world. But then sometimes I scroll through my feed and feel like I’m lying to everyone. If one of those candids came to light, it isn’t that it’s an ugly representation of myself, but it’s actually the true version of myself.

There are even times where my friends send me links to entry-level summer jobs they think are a perfect fit, but I feel deep down there is a better candidate for those positions. So I don’t apply. I take away any chance of myself gaining more than minimum wage.

That, combined with my knack of belittling every achievement I have had, makes it seem like I simply have some poor self-esteem, except it feels like more than that.

It feels like I’ve built a small empire – of confidence, beauty, and success – on shaky infrastructure; a castle made of sand.

Why does it matter?

Imposter Syndrome is a complicated concept and it definitely cannot independently explain why women don’t allow themselves to go towards high paying careers. However, it should be examined much more than it is, when female law students, professors and CEOS “find innumerable means of negating any external evidence that contradicts their belief that they are, in reality, unintelligent.”

I do call on it when people condescendingly claim that the wage gap is a myth, or when people try to reason through that specific issue by explaining that women are just less ambitious. Both of those reasons are just examples of people attempting to continue the narrative that women are inferior.

I know I’m not. I know women aren’t, but I think we all have that voice in the back of our heads that makes us question our worth.

Back to the Wage Gap

While millionaire actresses and celebrities stand with signs in their hands about the wage gap, uneducated as to why it actually exists, it makes their fight seem unworthy, and often exasperating. Not only to they stand with misguided signs, but are probably standing next to images of pink vulvas with the thought that all women are connected by same genitalia, and not mention, are all probably white. These acts are excluding many people and specifically disregarding how the wage gap disproportionally affects women of colour.

It is important to note that issues such as these cannot only be explained with numbers. It the lived experience that should be taken to account as well.

And in the meantime, we should create a mantra when those dirty, little thoughts sneak into heads, repeating over and over, “I can, I can, I can.”

Grant, Tavia. Who is minding the gap? The Globe And Mail (2017). Retrieved from: http://www.theglobeandmail.com/news/national/gender-pay-gap-a-persistent-issue-in-canada/article34210790/